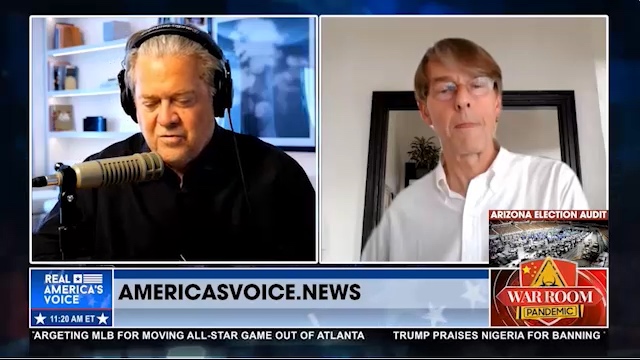 Yeadon: I’m very pro vaccines, I’m particularly pro-safe medicines. My biggest beef with the vaccines include serious concerns about safety, but I’ve got three points to make about the vaccines:

In absolute honesty, I don’t think they’re even necessary. Why are they not necessary? Well that’s because there are at least four or five safe and effective medicines and their presence has been suppressed and hidden from the public, so they’re not really necessary.

The next is, it’s not even clear if they’re effective enough. The trials have been done in a really strange way, where they used say PCR positivity as the endpoint with one minor symptom, so most people think of how a vaccine works – it saves you from serious disease or death things were not measured in the trial. So I’m not, I’m not saying they don’t work, I’m saying that data is not clear.

And then finally, they have not been sufficiently tested – if they have been approved for emergency use, fraudulently mind you because they shouldn’t do it if there are safe and effective medicines, and there are, they’ve just been hidden, so it’s an emergency use only and that means they’ve been plucked from the middle of late-stage development. They’ve still got about one-and-a-half years of clinical phase to run and they normally collect safety information as well as efficacy information. We don’t have that data, because we already are innoculating a billion people, but along the way we’ve, we’ve got some safety concerns.

Bannen: Ok as I want to go back to something because you come from the industry and you’ve actually made money on things that relate to vaccines, you say you’re pro-vaccine, right? You’re not an anti-vaxxer crusader. You’re not even vaccine-hesitant if it’s proper.

But I want to go back to your first point, because this is what people say, hey I see on TV, I see all these prominent scientists and they work with all these big companies and they seem like solid citizens, and they’re managerial experts in the world we live in.

They’re presented by experts by experts by NBC and CNN and Time Warner and the New York Times and all the experts after experts. I want go back to your first point – you said it was suppressed. What are the two or three things you think work. Why do you think they work and why were they suppressed?

Yeadon: OK, so hydroxychloroquine is it is a very common one and it reduces viral replication, so when it’s given at the early stages of infection it definitely reduces the viral load in a person, makes it less likely they will progress. Sometimes they add zinc as well because the hydroxychloroquine works by letting zinc into cells. Another major one is ivermectin which is an off patent antiparasitic and it also happens to have antiviral effects as well. Then the last two I guess would be azithromycin which is an off patents antimicrobial but it also has anti-inflammatory properties which we know about, and then finally inhaled steroids like Budesonide commonly used in asthma.

You have those four drugs. Dr Peter McCullough believe that almost no one who isn’t right at the end of life needs to die from this virus, and why have they suppressed?

I don’t know, I think it’s part of a fraud. I was on last week and I told you that all the main narrative points about the virus are shall we say, adjacent to the truth, lies, frankly, designed to make people fearful, and I think suppressing the drugs, the treatment, has had two benefits for whoever is doing this: one is it makes people willing to take the vaccine, and it makes vaccines available much earlier than they otherwise would and should have been so that’s probably the motivation.

Bannen: Back in the spring, we would some experts here talking about hydroxy, ivermectin, the very things that you’re talking about – not the steroids, but the first three; you know, we’d be taken down off Twitter… How did the social media companies… what was their rationale… What expert opinions did you ever hear of people that could back up everything, that this was all voodoo, witchcraft, dangerous?

Yeadon: I wasn’t very close to this, what was going on. I was focusing last year on PCR testing but I had a very good friend of position, a Doctor Tess Lawrie in the UK and she was reporting that they were writing up reviews of new collective technical information from around the world and it was clear in her case that ivermectin was working really well, and they were literally suppressing the manuscript, at journal level, so I’m talking about medical journals that you would think of as being beyond reproach. Someone was leaning on them and refusing to publish papers that are written to at least the same quality as everything else they were publishing.

Bannen: But Dr. Yeadon, science goes forward today with peer review journals, that’s kind of the high priesthood of scientific knowledge. How could the high priesthood be corrupted? Because essentially what you’re saying, is even at that level, that there was suppression from outside. What outside forces do you believe got into the temple?

Yeadon: I think journals have been provided with a lot of money, sometimes even acquired by interests that are now being manifest. Almost all scientists everywhere outside of the industry, if they’re in universities, they have to have to beg, steal, and borrow for their grants, so all the major granting bodies are also, I think, part of the pressurizing of the system.

Scientific review only works when you release the pressure and there’s a lot of pressure on these people.

Study: Ivermectin can lead to “large reductions” in Covid-19 deaths

Hydroxychloroquine is the smartest drug in history